The OAA’s 23 teams gathered for the third-annual preseason media day on Friday.

ROCHESTER — The third-annual Oakland Activities Association football media day was hosted by Rochester High School on Friday, which afforded coaches and a collection of players the opportunity to speak about the upcoming season. 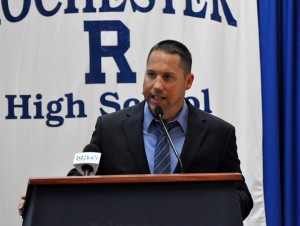 Red, White and Blue divisions, though a few teams have been shuffled around from a year ago. The 2016 alignment (teams listed alphabetically) is as follows:

The Red Division underwent some changes as Troy and Bloomfield Hills moved out of the division and were replaced by Southfield A&T, which will play its first season following the merger of Southfield and Southfield-Lathrup High Schools.

“We’re very excited,” Southfield A&T assistant coach Vernon Burden said. “The one thing I can say about the merger between Southfield High and Southfield-Lathrup is we’re ecstatic about the enthusiasm and how much of a growth mindset our students have. Our football players are coming together and bonding with each other.”

West Bloomfield is the defending champion of this division, but it will have to find adequate replacements for a large graduating class that included six players that went on to sign Division 1 scholarships.

“I’m privileged to be here again,” Lantzy said. “I can’t believe that about 45 years ago, (Farmington Hills Harrison coach) John Herrington and I played our first varsity football game against each other and here we are still standing.”

Like the Red Division, the White Division is also one team smaller this season, allowing its programs to schedule an extra non-divisional game.

Birmingham Groves is the newcomer to the division after winning the OAA Blue and upsetting Harrison in the first round of the playoffs last year.

Harrison went unbeaten within the division a year ago, but will be significantly challenged by a number of teams in its bid to repeat.

Oak Park and Farmington each qualified for the postseason in 2016, while North Farmington fell just short. 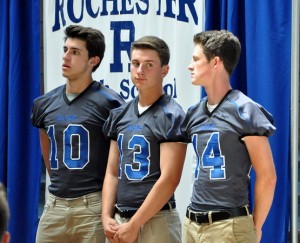 The Blue Division will be comprised of nine teams for the first time, as Bloomfield Hills, Troy and Rochester slide into the mix. Berkley was the only playoff team a year ago.

Auburn Hills Avondale will be coached by Ed Couturier, a long-time assistant with a number of local high schools.

Pontiac also has a new head coach in John Thompson.

“We have to change the tradition and culture of Pontiac football,” Thompson said. “We, as coaches, are going to teach them the game. We have some great kids out there that just need some direction. I’m glad to be a part of this.”