Rochester High School Girls Golf is good, no I mean really good. Last season was great, this year it has been spectacular. The Falcons finished state runner-up last season, and since that moment, have made it their mission to win the state championship. MISSION ACCOMPLISHED.

Rochester ripped off eleven straight tournament wins, including a regional title that bested all other scores in the state—ever. After the impressive recording setting regional performance, the Falcons proceeded to take an eleven shot lead (310) into the second day of the state championships. If there was any worry, well, lets just say the lead increased the next day. Rochester shot a (308) on the second, to win the state championship by 21 strokes over runner-up Novi. 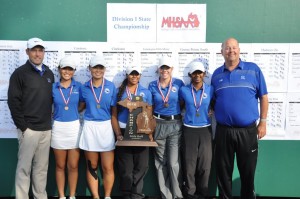 Seniors Brooke Busse and Veronica Haque both finished in the top eight for the Falcons, with Busse finishing 5th, and Haque 8th. Senior Erika Yang finished with an 84 on the first day, but followed it up with a 79 on the second day. Freshmen Savannah Haque, one of the top freshmen in the state, finished with 79’s on both days for Rochester, while junior Keri Yang was very solid shooting 83’s on both days.