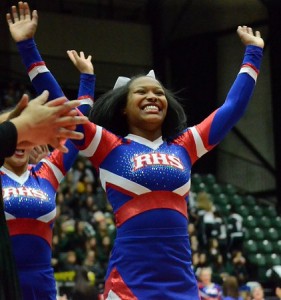 They say great programs don’t rebuild, they reload, and that’s exactly what Rochester did this season. After going undefeated last season and capturing their 18th total state championship, the Falcons knew they had their work cut out for them. This seasons team would be very young compared to last year’s, but they were up for the challenge. Led by a strong senior class consisting of Zy Turner, Hope Fryer, Sam Ellison, Megan McMurray, Sydney Asuncion, Morgan Libby, Adriana Nikaj, and Mattea Sykes, Rochester set their sites on state title number nineteen.

Rochester started the season by winning the first OAA Red competition of the season, and then saw a few struggles that come with having a young team. However, Rochester would find their way in early February, and would go onto win 5 straight competitions before heading to the state finals. Rochester would win the Lake Orion Invitational, the OAA Red Cahmpionship, the Delta Plex Inviational, and both District and Regional titles. 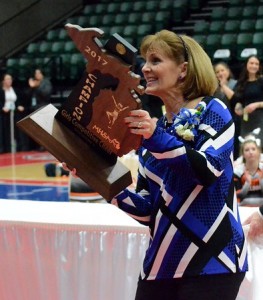 On Friday it was all on the table, and Rochester never flinched. The Falcons won round one with a first round score of 236.5, which placed them ahead of Stevenson and powerhouse Grandville. In the second round Rochester would again lead all scorers with a 231, and the third round saw the Falcons achieve a wire-to-wire lead to finish with a final score of 789.02. This is Rochester’s 14th MHSAA State Championship, and 19th overall. Rochester wins their first back-to-back state title since 2007.

*Photos courtsey of the MIPrepZone