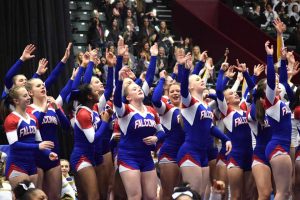 The Rochester Competitive Cheer team is known statewide as the best program over the history of competitive cheer being a sport. Legendary coach Susan Wood led her teams to back-to-back state titles the previous two seasons, and despite all of the challenges this season, the Falcons finished the year as the third best competitive cheer team in the state. Rochester held the third place position from start to finish Friday, March 2nd, as the Falcons fought to try and take over the second position from rival Adams, but the highlanders came out one point stronger as the final results were posted. Sterling Heights Stevenson, a team favored to win it all, did exactly that, winning their first ever competitive cheer state championship. Rochester will again be a favorite to be one of the top teams in the state again next season, as the Falcons look for their 20th overall state title.