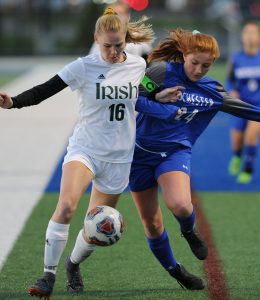 Last night, the Falcons went up 1-0 quickly against Notre Dame Prep as Senior Lily Cooper received a pass from Senior Mackenzie Smith and scored thirty seconds in to the match. In the second half, Junior Sidney Swart put in a cross that found Senior Jillian Lekosiotis, who headed the ball in to the back of the net. Senior Kaitlyn Godwin made 4 saves to earn her 41st shutout of her High School career. The Falcons are 9-4-2 on the season and play OAA Red league opponent Stoney Creek on Thursday at Stoney Creek.