On Monday of this week the boys varsity soccer team took the field in a cross over game with Southfield A & T from the blue division. Five first half goals from Jack Myers, Gunnar Foster, Brady Altherr, Niko Stathakios and newcomer Carlito Ankawi all but sealed the game. Two quick second half goals from Niko Stathakios and Brett Benedettini put the game away for a final 8-0 win. Eight goals provided eight assists which came from Jack Myers, who had two, Cole Wheatley, Viktor Juncaj, who also had two, Stefan Baseski, Drew Simpson and Brett Benedettini. Freshman Tommy Ferrill recorded his first career shutout. 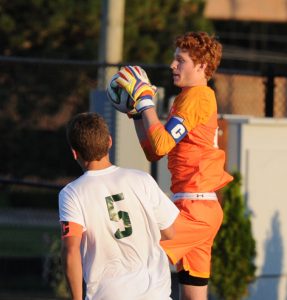 The boys varsity team closed out the week 3-0 with their third straight victory. This time over their crosstown rivals, The Stoney Creek Cougars. The first half concluded with a 0-0 tie as both teams had their scoring opportunities. Early in the second half Rochester capitalized on a set piece from 25 yards out. Viktor Juncaj sent a whipping ball into the 6-yd box and senior defender Brett Benedettini buried it into the back of the net for a 1-0 lead. Less then 10 minutes later the Falcons converted on a penalty kick, this time Juncaj did the scoring. The game ended with the Falcons playing excellent team defense. The 2-0 victory concluded a great week for the Falcons. Jasper Najar got his second straight shutout and third of the early season. The falcons are back in action Tuesday Sept. 3rd at 7pm as they host a crossover game against Ferndale.