Rochester started the night slow by dropping the first set to visiting North Farmington, but then won games 2 and 3 decisively.  Game 4 saw a Falcon lead slip away giving the Raiders a 27-25 win to head to game 5.  The final set was in hand with the score 14-7 Rochester, but North Farmington rallied to score 6 points in a row.  The Falcons would hold, winning the set 15-13 and the match 3-2. 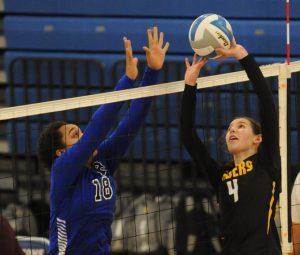 Jasmine Savoi each had 9 kills. Senior Sidney Swart had 18 digs for the Falcons. Senior Setter Jesi Abolins played well on both offense and defense and set up the winning kill by Junior Molly Rodgers.

The Falcons next Home match is 10/10 against Seaholm on Senior night.