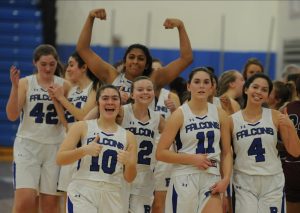 The Rochester Falcons gutted out a 33-31 win over the Berkley Bears in a key OAA Blue girls basketball match-up Thursday night.

The Falcons took the lead for good when Megan Lorenzo drained a 3-pointer from the right corner with 3:08 left to play.

Rochester had led almost the entire game. The Falcons opened the contest by going inside to Ananya Rangarajan for a pair of buckets and an early 4-0 lead.

Rochester would maintain the lead almost the entire game, trailing only briefly twice – once in the second quarter by a point and early in the fourth quarter by two points. But in each case, the Falcons scored on the next possession to erase Berkley’s lead.

“These girls, every game they just keep getting better, and for us to be able to pull that off – we’ve lost a couple of close games this year, and it’s because at the end of the games we get so close and we don’t take it to the next level. Tonight, they took it to the next level as being able to control the ball the last minute, two minutes of the game,” Falcons head coach Bill Thurston said. 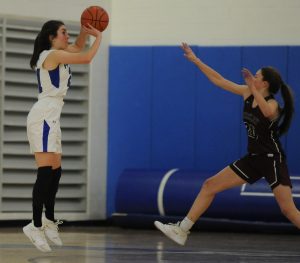 On the other hand, both defenses were challenging everything – forcing misses and causing players to rush shots. The result was a tight game as the teams were never separated by more than six points all night and most of the game the teams were within a single possession of each other on the scoreboard.

Berkley’s Ashley Loon drives around Rochester’s Megan Lorenzo (11) during the game played on Thursday, February 6, 2020 at Rochester HS. Loon had a game high 17 points but the Falcons defeated the Bears 33-31 to take sole possession of first place in the OAA Blue at 7-1. Berkley falls to 6-2. (MediaNews Group photo by Ken Swart)

Ashley Loon led the Bears with a game-high 17 points. At one point, Loon scored 12 straight points for the Bears – including all 10 points second-quarter points for Berkley.

“She finally got herself going a little bit,” Bears head coach Kirk Carolan said. “She’s been struggling a little bit this year. Most teams have been keying on her and trying to stop her, and she stepped up big tonight really.”

The Bears also got a strong performance from Charlesa Rice, who finished with five points and a team high 11 rebounds as the Bears out-rebounded the Falcons 42-40. 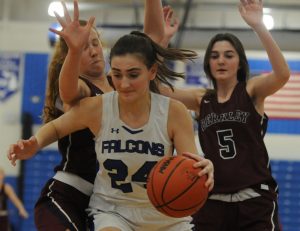 “We rebounded the ball well. Our kids played hard. We thought our press worked fairly well. We got beat a couple times, but you’re going to get beat in the press when you’re doing that.” Carolan said. “It’s just a bummer. It’s a bummer because we needed this one to get in the front of the league, and now we’re looking for some help somewhere. So we have to take care of our own business from here on out, and that’s how it’s been the past few weeks.”

Rochester, however, had a bit more offensive balance. Rangarajan led the Falcons with 12 points and a game high 12 rebounds. Lorenzo added nine points, and Brianna Mazur added eight points, six of which came in the final period, and nine rebounds.

With the win, Rochester (8-6 overall, 7-1 OAA Blue) assumes control of the division race. Next up for the Falcons is a road test against Oak Park on Tuesday in another OAA Blue contest.

“I told the girls is that it’s not over. Oak Park played us pretty tough the first time. They played Berkley pretty tough the last time, and they’re doing a great job over there. It’s not over,” Thurston said. “It’s a matter of finishing these games. Our goal this year was to win the OAA Blue and to get the districts and hopefully do something in the districts. And I think that we’re on pace to be able to do that because we keep getting better.”