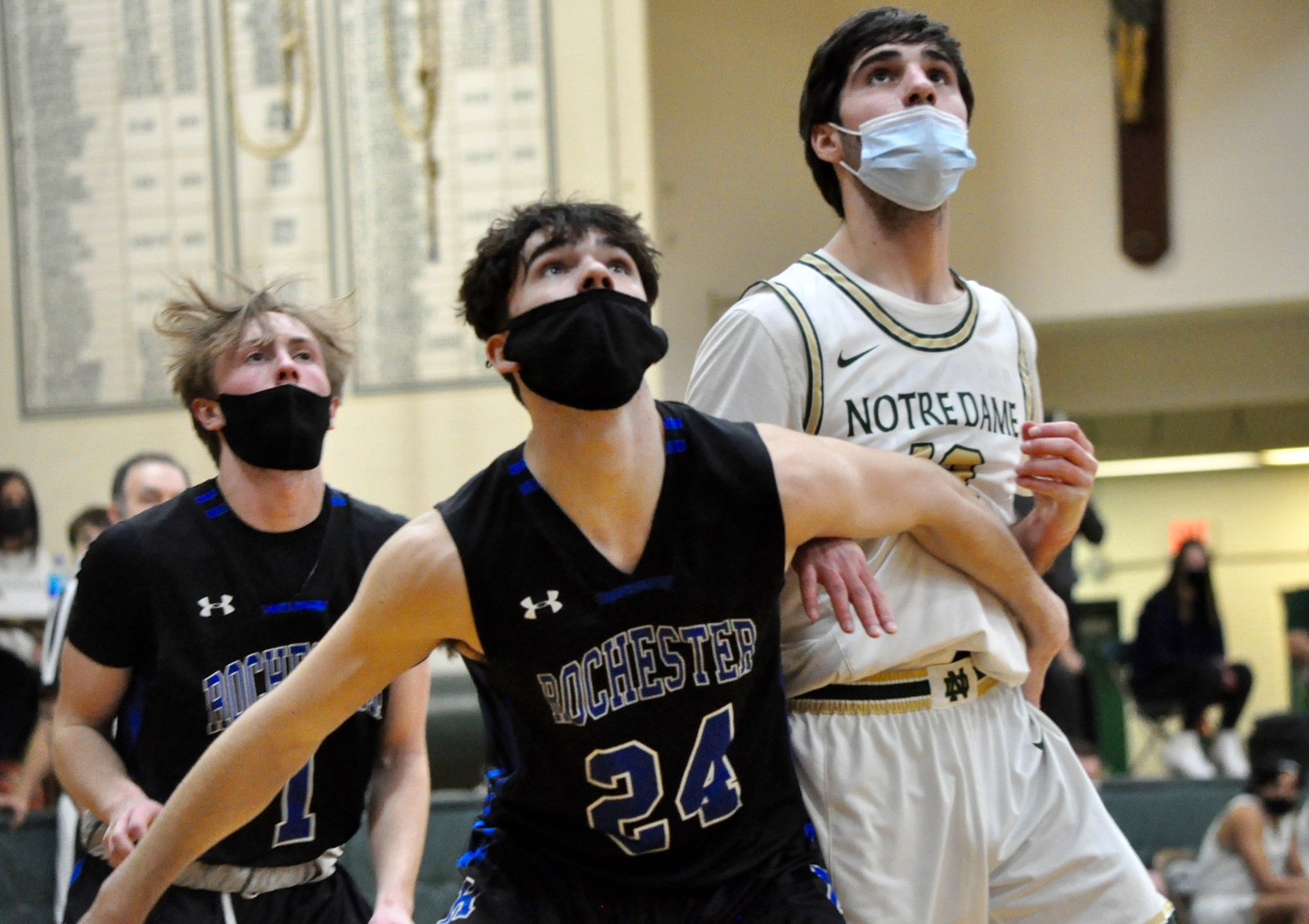 Facing a two-point deficit with no timeouts and just seven seconds remaining, Rochester couldn’t hesitate if it wanted to complete its comeback against Pontiac Notre Dame Prep on Tuesday.

Following a split pair of free throws by the Fighting Irish, the Falcons improvised to perfection to force overtime. Junior Louis Bowes took the inbounds pass across center court and dished a crisp pass through traffic to junior Matt Stone, who finished his layup to knot the score 70-70 at the buzzer.

In the extra session, Rochester’s late seizure of momentum carried over, allowing the Falcons to emerge with a jubilant 79-73 victory.

“The awareness of the guys blew me away,” Rochester coach Vance Kirkwood said of the dramatic game-tying basket. “They were obviously face-guarding Matt Stone, who had 27 points tonight, but he just kind of got loose. My guard, Louis, noticed it and made that quick thread-of-the-needle (pass) and he scored. 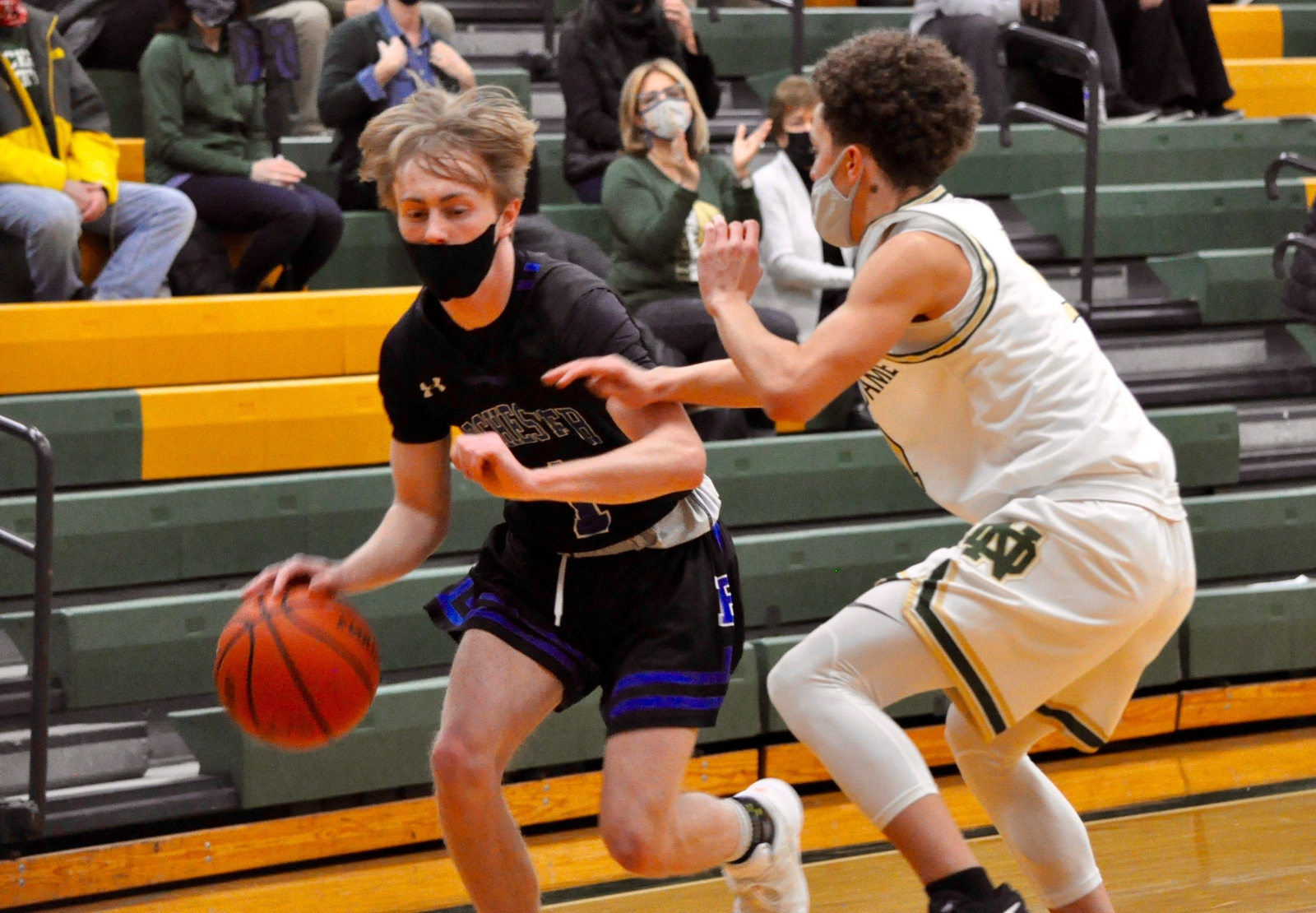 “I was out of timeouts, but I don’t think we would have been (in position to tie) if I hadn’t used those timeouts earlier. We were okay. We’ve practiced this and we go over it in practice — quick decisions if we don’t have timeouts. The guys know what to do. (I tell them to) pick their head up, go as hard as you can, view the floor and make the best decision you can.”

Bowes featured prominently in the overtime as well, scoring all of his team’s points on 9-of-10 shooting from the free throw line. Concurrently, Notre Dame Prep’s shooting went cold, mustering just one basket after the deflating conclusion to regulation.

“We came out in overtime and just couldn’t make any shots,” Fighting Irish coach Whitney Robinson said. “Those shots we missed, we usually make. We were 1-for-9 from 3-point (range) and that’s not like us. Some of those were bad shots, some were decent ones. They just didn’t fall.”

The Falcons trailed by four in the final minute of the fourth quarter until Stone drained a step-back 3-pointer to make it a one-possession game with 17 ticks remaining. One missed free throw by the Irish was all it took to create the late opportunity to tie.

“Instead of thinking about the previous two overtime losses, we really dug in and we really executed almost perfectly toward the end of the game. That’s what I’m most proud of,” Kirkwood said. “Notre Dame Prep is a well-coached, great team. But my guys just wanted this and we were tired of talking about woulda, coulda, shoulda.”

In addition to Stone’s 27 points, Bowes totaled 17 and junior Armaan Hussaini added 13 for the Falcons (3-4).

“Take nothing away from (Rochester), but to be in control, we have to make all of our free throws and be greedy making every single one of those down in the clutch,” Whitney Robinson said. “We just came up a little bit short.”

Looking ahead, Notre Dame Prep (3-3) returns to action Thursday at Lakeland, while Rochester is idle until facing Ferndale University on Friday.