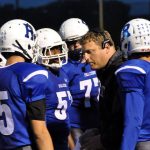 Article Courtesy of MIPrepZone By DAN FENNER ROCHESTER HILLS — Trailing by just a touchdown at halftime Thursday, the Troy Colts recognized in the locker room that the game was there for the taking. With renewed energy, Troy dominated the second half of play, scoring 21-straight points during one stretch to capture a 28-21 victory

The Rochester Football team has now won three straight, including Friday’s win over Berkley, one of the better teams in the OAA Blue. The Falcons found themselves down 13-0 early, but would storm back behind a strong effort from their stable of running backs. Jack Beddow, Jamier Scott, and Antony Smiles, all helped to power 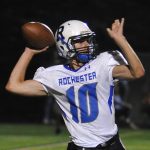 Rochester jumped out in front of Avondale quickly, going up 7-0 early. The Falcons would get another score from Drake Reed (on a throw from Brent Burtraw) to push the lead to 14-0. Rochester would get the ball back and drive deep into Avondale territory, but turn it over on downs. This turned out to 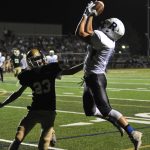 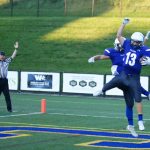 Article courtesy of MIPrepzone By MICHAEL WALLWORK @MIPrepZone ROCHESTER HILLS – The Bloomfield Hills Black Hawks rolled to a 40-13 victory over the Rochester Falcons behind dominant line play on both sides of the ball. The Black Hawk defense set the tone on the game’s first possession when Jack Sape recorded back-to-back sacks to force 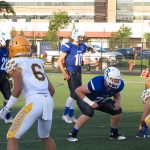 Rochester High School hosted rival Rochester Adams in their only home game at Rochester Stadium this season on Friday, August 26th, in front of a standing room only crowd. The Falcons kept it close early, tied 7-7 after a 1st quarter touchdown run by Jameer Scott. Adams would go ahead 14-7, before Rochester struck back

Rochester Football will open up the year against rival Adams on Friday, August 26th, at 7pm, at Rochester Stadium. This is the first time that the two rivals have ever opened up the season playing against one another. There will be a tailgate celebration starting at 3:30pm before the game which includes: live music, food,

article courtesy of MIPrepZone The OAA’s 23 teams gathered for the third-annual preseason media day on Friday. By DAN FENNER @DanFenner  ROCHESTER — The third-annual Oakland Activities Association football media day was hosted by Rochester High School on Friday, which afforded coaches and a collection of players the opportunity to speak about the upcoming season. The